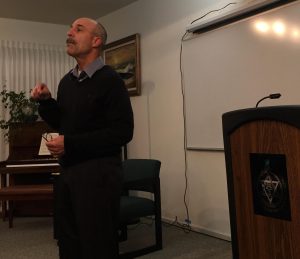 On November 29th, 2016 the Theosophical Society in the Ojai Valley that meets at Krotona School every Tuesday at 7:00 PM held an inspiring talk “Emerson on the Over-Soul and H.P. Blavatsky’s The Secret Doctrine” given by Gerry Kiffe. The meeting was well attended by both members and non-members of the Lodge. Gerry’s approach to encourage those who were present to participate by reading a few passages from Emerson’s essay was very welcoming. A concept of the Over-Soul as a principle of innate unity and oneness underlying all life is the main idea sounding through The Secret Doctrine and is the key to understanding of the divine essence of the human nature. Emerson beautifully expresses this idea, “meantime within a man is the soul of the whole; the wise silence; the universal beauty, to which every part and particle is equally related; the eternal ONE.” Closer to the end of our meeting all the participants had a vivid discussion on the Emerson’s essay and his life journey as well. Gerry Kiffe for many years has been participating in Los Angeles and Santa Barbara United Lodge of Theosophist activities, and having him speak for the TS in the Ojai Valley that is connected to the TS, Adyar was a perfect opportunity for the students of theosophy of different theosophical groups to study together.