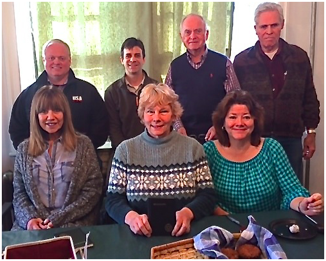 The buzz of excited inspired conversation almost always dominates ITC gatherings, as was the case in New York three years ago when Tommy Kehoe of Philadelphia ULT and Nancy Bragin of the Theosophical Society Abraxas Lodge in Southampton PA met. A dialog ensued about joining forces and lodge resources to study theosophy and create opportunities to share our rich theosophical heritage. Soon after, an Ocean of Theosophy Study Group was formed and met on Saturday mornings at the quaint and picturesque Quaker Friends Meeting House in Bucks County. In October of this year a new Study Group began on The Bhagavad-Gita from the Sanscrit by William Q. Judge facilitated by Tommy Kehoe. Spirited dialog and laughter can be heard most Saturday mornings over the smell of coffee brewing as new friendships are formed and a deeper understanding of the sacred text unfolds and is embodied by the group; there is no such thing as separateness, and we must act accordingly.  The time flies and we are reluctant to end the weekly sessions. “Just one more question, one more discussion, please.” Universal Brotherhood in the City of Brotherly Love – it doesn’t get much better than that.

Nancy Bragin, a member of the TS-Adyar is working with Tom Kehoe, a student of the ULT in a collaborative effort helping the ITC board to host a conference in Philadelphia.