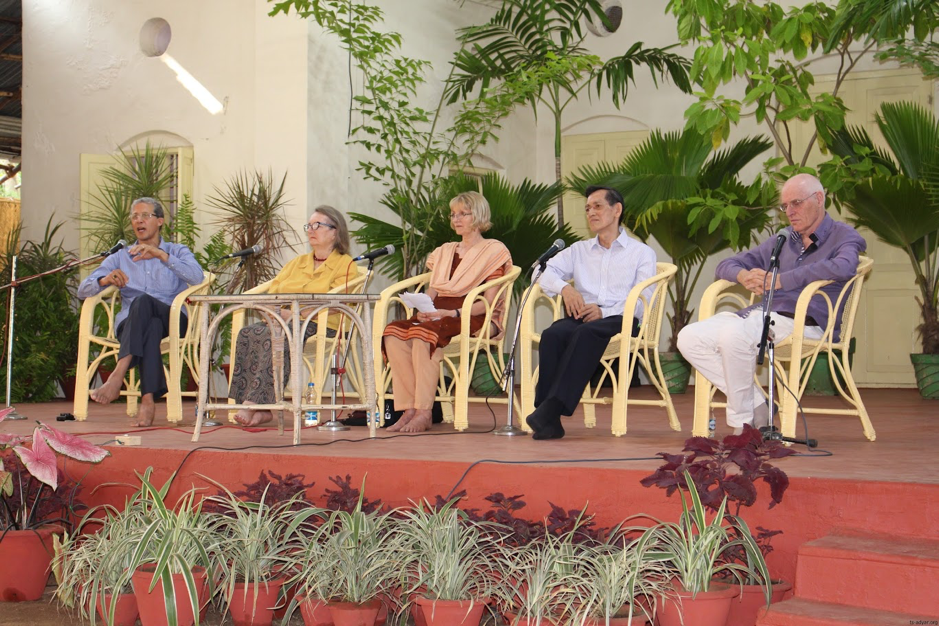 In the middle of the grounds of the TS in Adyar is an ancient banyan tree. Tendrils hang down from the branches of this wonderful tree, which reach the soil, strike into the ground and become roots. The earth in its turn accepts these branches, which root there and become another trunk.  All these new trees remain part of the mother tree.

Thinking back on the 141th Convention of the TS Adyar and the history of the Theosophical Movement, the image of this tree always comes to mind. It is a magnificent symbol of unity within diversity. The same lifeblood flows from the Lodge of Wisdom and Compassion and runs through all the branches of the Theosophical Movement. In the same way as the banyan tree, the Great Lodge (started in 1875) has also branched. There are different theosophical societies and groups and even independent, individual Theosophists, around the world. Even within the TS Adyar there are different sections and lodges, which all slightly differ one from another. There are educational systems, movements for justice, and against cruelty etc., which all have sprouted from this “Theosophical”- banyan. I considered all the participants of the Convention as living parts of this holy tree, who all tried in their own way to give shape to the theosophical ideal.

The unity within the diversity struck me (member of the Theosophical Society Point Loma). There were many people from diverse parts of the world who had come to Chennai, specifically to participate in this Convention. It is heartening to note that in many places of the world people try to live the ideal of unity and brotherhood, that I also consider to be the major accomplishment of my life.

Every conversation I began with someone I did not know, soon turned to Theosophy and the situation of their respective lodge. Everyone had a Theosophical background, but I also noticed that the “image” people have of Theosophy differs depending on their background and perspective. For some people Theosophy is a kind of spiritual voyage or development. They are more interested in things like yoga, meditation and self-development. Others are much more concerned with how to spread Theosophy among their fellow men and especially among the younger generation. I had some nice conversations about how to give a lecture in a more interactive way. Some people are willing to study hard, and I talked with them about the ‘technical’ aspects of Theosophy. I also met participants who are extremely interested in all kinds of education issues.

As a newcomer on the large grounds of Adyar, it took some effort to find my way. Where were the lectures held? Where should I sign up? Fortunately, I received assistance from some Brazilian friends, I had met during my stay at the Theosophical Institute near Brasilia earlier in the year. With them, my wife and I drove in a rickshaw over the large estate, viewing the many buildings and temples, and above all, the headquarters and the library. Mr. C.A. Sindhe, head of the library, gave us a tour. I was very impressed by the large number of books, especially the old Sanskrit works on palm leaves. I saw that volunteers were busy digitizing books, which enables more access and keeps the fragile documents from being handled too much by researchers.

Erosion had damaged many buildings on the compound considerably. Michiel Haas, a famous Dutch architect, created a plan for renovation. He spoke about this in a presentation. These historic buildings are very important for many people, although I also spoke to a member who felt that the spread of Theosophy is much more essential. For many, the compound has a strong positive energy. Personally, I think that the positive feeling was coming more from the people present at the Convention than from the historic buildings, however interesting and beautiful they may be. The peace and tranquility on the site, especially if you compare it with the bustle and noise of the city, is a pleasant and an immersive spiritual atmosphere.

At a Theosophical convention, the ideas that are put forward in various lectures, are of course the most important. The Convention’s theme – beyond illusion, a call for unity – was presented in a diverse way. There were small talks, more scientific approaches, and those presentations that tried to substantiate the theme with Theosophical teachings.

A recent cyclone had blown away the roof of the Adyar theater. Staff had worked around the clock to rapidly construct yet another temporary theater roof, under which the presentations were going to be held.  The audience listened quietly and disciplined to the lectures. Occasionally there was the opportunity to ask questions, however, some people made use of to give a little talk themselves!

My experiences after I had given my own lecture, on the third day, differed quite all lot with those before my talk. My friends from India approached me after my talk modestly, sometimes even a little shy, but also with a strong will to speak to me. They asked questions about the content. Sometimes they gave a short summary and asked whether that was correct. Often such talks ended in exchanging emails and taking pictures. People asked me about the TS Point Loma, and what activities we organized, etc. I regretted the fact that the people from India ate in a different place than the “overseas” participants.  I learned that this had to do with the spicy food they eat and the difference in meal-time. However, I was disappointed, because I would have liked it very much to discuss Theosophy with them on a deeper level.

What also struck me was that everyone was willing to listen to each other. Of course, we sometimes differ from opinion. As a member of the TS Point Loma I learned a lot from the books of Gottfried de Purucker, and I know less about the works of Annie Besant. But not once did I experience that people tried to convince me to have another view than my own, and it was always an open and friendly discussion.

I especially enjoyed the cultural meetings. I love Indian music and could appreciate both the Indian dance and the violin concert. But my heart was mainly stolen by the choir of 350 children from a nearby school.

Throughout the Convention I was thinking (and I am still pondering about it) how we, as joint Theosophists, can exert much more influence in the world. It is clear to me that only by working together can we be useful instruments for the Masters.

My overall experience during the Convention is that Theosophists from different organizations are getting to know each other ever better and becoming real friends. Therefore, we can talk openly about sensitive topics, like some troubles there were in the past.

However, the great atmosphere during the Convention did not prevent the participants from being concerned about the future. How do we ensure that Theosophy will remain in the coming times? How can we enhance our influence on the world events? How do we reach to the youth? One thing is sure, we should work together to achieve these goals.

Each new trunk of the banyan tree is a little bit different than the trunk from which it originates. In this same way, you can undoubtedly identify differences between the Theosophists of Adyar, ULT, and Point Loma. The Convention’s theme – a Call for Unity – however, should make us realize that we must focus primarily on unity: the common background, the live-giving sap of compassion, flowing from the mother tree to all her branches. Only then we let grow the banyan tree, and let it branch out into all various circles of society.

Arriving at the Theosophical Center in Adyar, India for the first time, one feels thrust back into the 19th century. The feeling is magnified by the realization that here is where H.P. Blavatsky lived and worked for several years. History is alive. As one settles in, the physical surroundings reinforce the sense of a special place of retreat. Pure air, gentle breezes, hundreds of beautiful trees filled with birds and the warmth of tropical temperatures encourage contemplation of nature’s bounty. Many took advantage of the paths to the beach as well as to the Library, the Publishing House, the Museum and to the numerous historic sites.

As more conference attendees arrived from all over the world, meeting people and friendly conversations created a shared sense of community. Formally, the conference opened and closed with prayers and chants expressing the major religions of the world. Both unity and diversity were respected. The International President of the Theosophical Society, Tim Boyd quickly demonstrated his leadership skills. His openness, accessibility and creative innovations were central to the success of the conference. A video giving the geography, statistics and activities of the many Theosophical Centers around the world was very informative especially for a visitor representing the United Lodges of Theosophists.

Several talks and panels offered lucid perspectives on the teachings of Theosophy. One excellent talk on “Beyond the Brain: The Unifying Force of Consciousness” given by Dr. Sangeetha Menon presented distinctive evidence of why the materialistic focus on the brain cannot give a sufficient explanation of human mental capacities. Many talks described the path to the “spiritual mind” that H.P.B. referred to. Others addressed the call to unity included in the conference theme. One unique panel made up of representatives of T.S.– Adyar, T.S.- Point Loma and ULT answered questions submitted by Conference attendees. All of the lectures and panels are posted online for convenient viewing.

Very enjoyable were the special events expressing Indian performance culture – a skillfully done demonstration of classical dance, a violin concert and a delightful performance of a huge, local Children’s Choir. Sitting close to 250, bright eyed, talkative school Children, I saw pure joy. Would that children all over the world could be so happy and full of song.

Last but not least, attending the conference raised in my mind many thoughts and questions about the future of the Theosophical Movement. What should we be doing to spread broadcast the teachings? What activities will most effectively expand the breadth and depth of our effort?  What technologies are most effective? What shared aims should we focus on?  This is a ripe time for re-thinking our priorities and to try harder to fulfill the vision given by H.P.B. in the concluding chapters of The Key to Theosophy.

With appreciation for the opportunity to attend this conference.